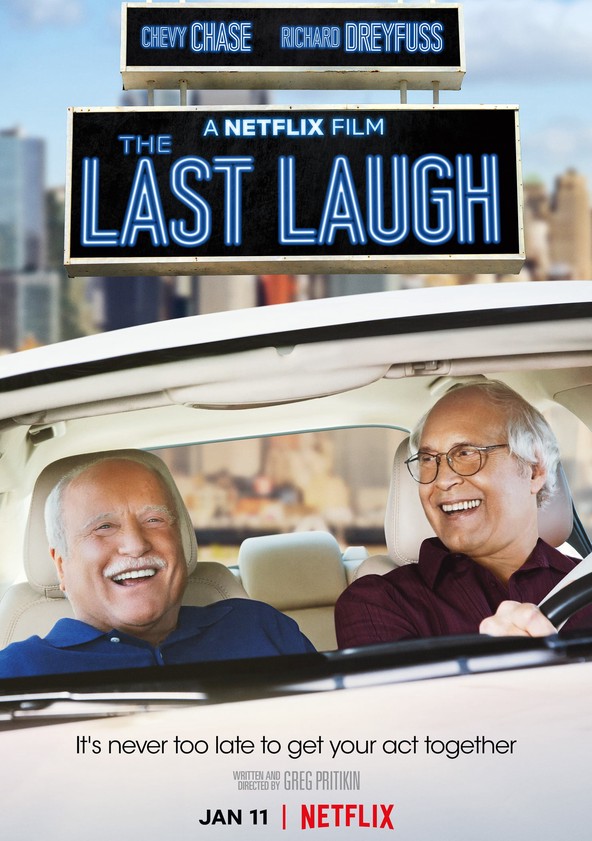 Al (Chevy Chase) has managed talents in quite some time and even though he gets that itch every once and awhile, he never seems to want to leave his rather comfortably relaxed and lazy retirement. But it’s only until recently that the itch comes back to him and it’s in the form of his good old buddy Buddy Green (Richard Dreyfuss), a former-comic who could have made it big back in the day, but for some inexplicable reason, never made it to the big time. Now, Al feels that sudden urge to push Buddy back to the top and although it takes some convincing, the two head out onto the road, one gig at a time, until Buddy is back on every person’s TV screens in the country. However, age has definitely gotten to them and as they are taking another stab at this new adventure, they are also realizing that their lives are slowly, but surely, coming to an unfortunate end and right now, it’s their last act.

The Last Laugh is another movie where I don’t want to hate it because it never really does anything awful, nor does it set out to offend anybody who decides to sit down and watch it. It’s a perfectly passable and agreeable movie about old dudes trying to be funny, not really connecting at it, and also trying to reexamine their lives. It’s the perfect movie to put on while you’re doing literally anything else, which is why it’s probably perfect to be on Netflix, the home and king of having something on the screen while you’re not really paying attention to it.

But shouldn’t it have attempted to be so much more? Especially with the pairing of Dreyfuss and Chase, as old and past their prime as they may be?

In a way, yes. But also in another way, not really.

See, the issue with the Last Laugh is that it’s not very funny, or even attempts to try anything fresh or even new with this sub-genre of “old dudes trying to rediscover old magic”. It’s the kind of movie that likes to make fun of the hammy, lazy and generally cheesy comedy that these characters grew up and performed with, but at the same time, doesn’t really offer anything special in return; simply saying something is corny, isn’t enough. And for a movie that’s all about the great times and the love and adoration for comedy as a whole, it’s a movie that doesn’t have much effective comedy, nor does it really seem to have anything to say about aging, especially in a world that’s rapidly changing.

But really, as much as I wanted it to be about something so much more, really, the Last Laugh isn’t and I guess that’s okay. If anything, it amounts to be nothing more than just seeing the pairing of Chase and Dreyfuss, both of whom are doing the best they can with roles they haven’t seen as of late. But even they feel a little bored; they’re stiff, the timing is a bit off on just about every joke they make, and the chemistry between them isn’t quite there. This probably shouldn’t be all that surprising considering that they’ve always be known as two actors who were extremely difficult to work with, but in something as boring and as middling as this, you would have hoped for some unexpected fireworks.

Or, hell, literal fireworks. Anything to make this fun, or even the least interesting.

Consensus: Hard to hate, the Last Laugh is passable by a certain degree, but also lazy, dull, and conventional, yet, without any real heart to keep it interesting. Aka, it’s perfect for Netflix.