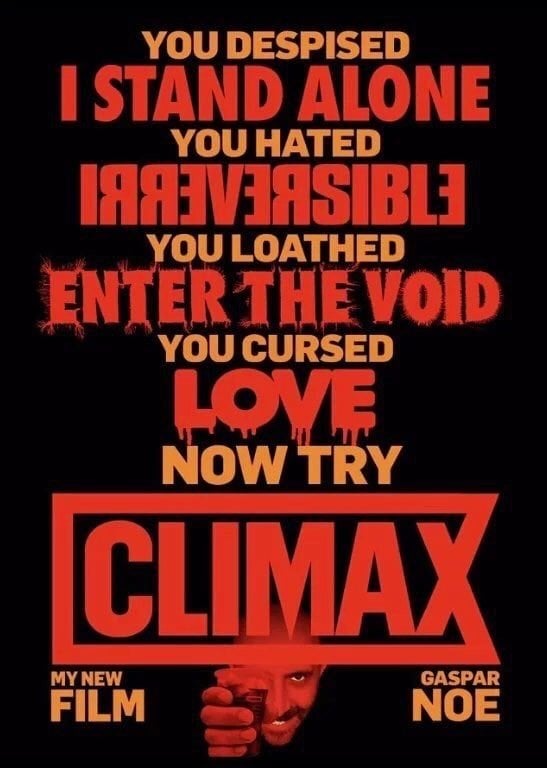 Dance till your heart explodes. Literally.

Right before their big show, a French dance troupe get together in an small school in the late, late hours of the night so that they can rehearse and of course, celebrate their big break. And what better way to celebrate than with a bunch of booze, beats, drugs, dancing, and oh yeah, sangria? Well, turns out that the later option will make the night a whole lot crazier and for mostly everybody involved, bring out the darker sides within them that were just always waiting for their moment to come out and unleash holy hell.

And yup, that’s pretty much it.

Climax is the best, most effective movie Gaspar Noé has made since Irreversible, which doesn’t mean because it’s more offensive or controversial. Sure, there’s a part of him that’s still pushing buttons here and willing to poke at his audience enough almost to the point of sheer annoyance, but he also doesn’t forget why his works were so compelling in the first place: The sheer and utter brutality of them all. And while it’s hard to say which one’s more disturbing or graphic between Climax and Irreversible, I think it’s safe to say that they both show what happens when a writer-director has an idea, has a vision, and he actually executes both of them.

Sounds simple and obvious, but knowing Noé, this hasn’t always been the case. Lately, it seems like he’s become something of a self-parody of the shock-rock auteur that he was once hailed as; Enter the Void was much too long and babbling, while Love felt like it was two-hours too long and filled with nothing but just a bunch of sex and full-frontal nudity. Even I Stand Alone, his much-loved debut, hasn’t aged all that well because, well, he’s just throwing a lot of nasty and awful stuff at the wall and seeing what he can get to stick, and then wiping all of that with a coat of red-paint.

Trust me, it sounds more fun than it actually is to watch. But with Climax, it feels like Noé actually wants to do something here that’s more than just a bunch of debauchery, saturated colors, and cool camera-angles – he wants us to actually feel like we’re witnessing hell on Earth.

And damned, I’d be mistaken if I didn’t say that’s exactly how this felt, and for all of the right reasons.

It’s really hard to dive-in deep into why Climax is as grueling as it is, but just to say that there’s a certain layer of tension in the air right from the very beginning and it hardly ever leaves. Of course, there are gimmicks galore to be had here – long tracking-shots, random cuts, etc. – but it’s what we’ve come to expect from Noé by now and it just feels like he’s reeling us even more into his dangerous game. We never know what’s going to happen next and honestly, keeping us in the dark is perhaps the best solution; we never know just where the hell we’re at, or what’s really happening to these characters as they start to go a tad bit mental, but really, it doesn’t matter.

What does matter is that Climax is an experience in the best sense of the word. While I know that sounds awfully pretentious, it’s hard to say anything else that perfectly describes it. It’s not necessarily a deep movie with smart, engaging, and fully-rounded characters, as much as it’s about a bunch of young, attractive French folks who can dance like crazy when they want and it only gets better once you realize that something is awfully awry and you have nowhere to go. You’re stuck, hell, you’re trapped, and it’s Gaspar Noé that’s not going to let you out of his sight.

And for once, in what seems like a rather long time, I’m happy about that.

If “happy” is the right word to use, that is.

Consensus: Extremely creepy, kinetic, unpredictable, and disturbing, Climax is another controversial offering from Gaspar Noé, but is much more than just a stylish-piece of art and instead, a journey into the war machine that is his mind.

Photos Courtesy of: A24