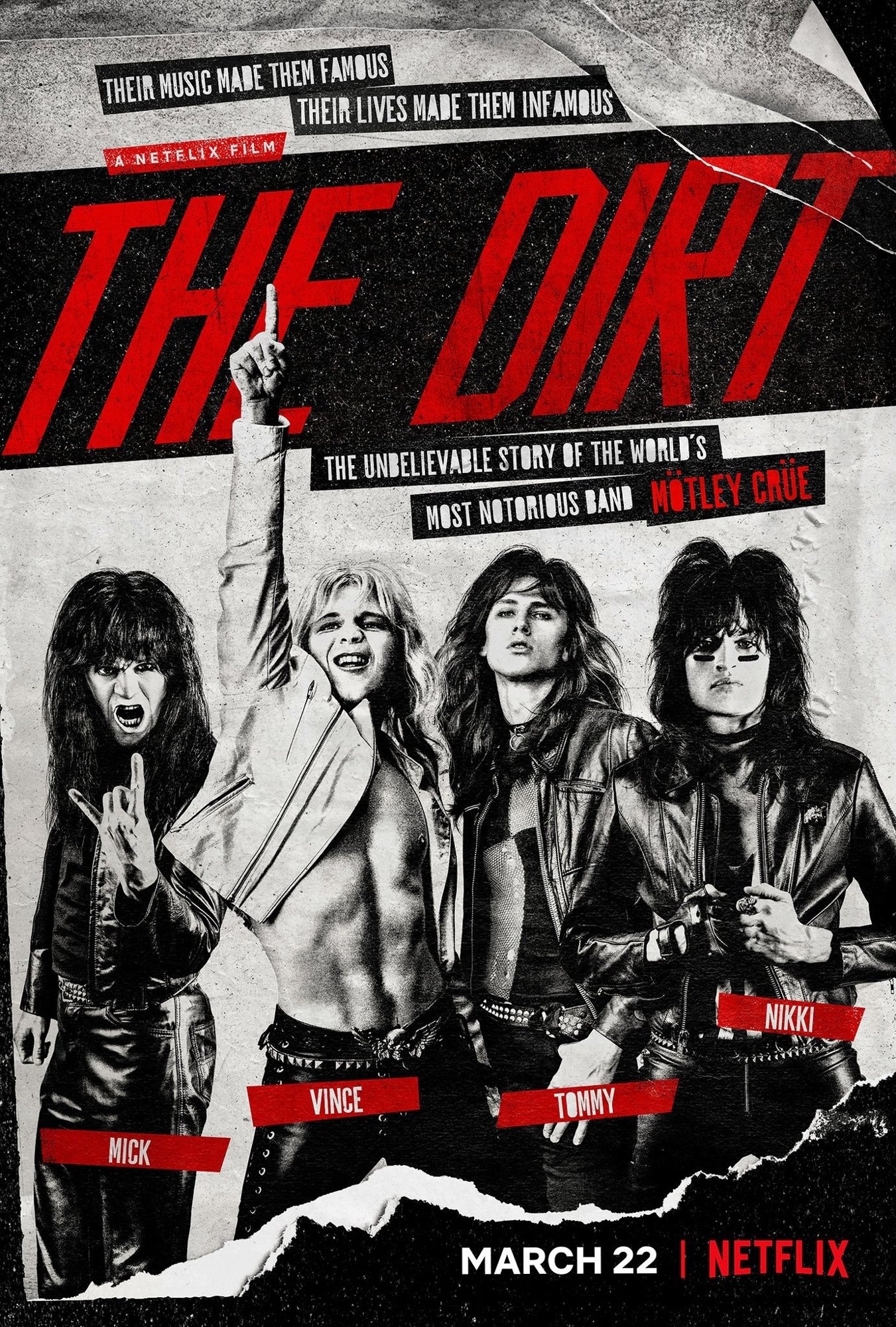 Glam is dead. Thank the heavens.

Back before they were the biggest band in the entire world, the guys who made up Mötley Crüe were just four young stragglers looking to get by and making a name for themselves. Obviously, they all came from checkered pasts, they didn’t have a dime to their name, and all shared the same love for rock, roll, and all things hard, and it’s why they became a band in the first place. It was also, unfortunately, the same reason why they broke up so many times, only to get back together and realize that no matter how many times they break-up, they can’t keep away the good times and all the rock and roll that they love.

And also, the money. Actually, most definitely the money.

There’s obviously a question about whether or not the Dirt should have been made in the post-#MeToo era, and at times, I myself battled with that same question. While all of the sex and depravity that happens here is mostly seen in the simplest of lights, where everyone participating has agreed on some sense of consent, there’s a scene in which Tommy Lee (Machine Gun Kelly, the only American in a main role) punches his girlfriend for punching, slapping and pushing him. He realizes the mistake he’s made and runs to the back of the bus, and that’s it. The scene is never talked about again, no lessons are learned, and mostly, it’s treated as an afterthought, because the boys are next scene partying, drinking, and shootin’ stuff up.

And that’s about as deep as the Dirt is willing to get and in a way, that’s fine.

Mostly, the Dirt isn’t pretending to be anything it’s not; it knows that it’s a wild and crazy ride full of sex, drugs, metal, big hair, big music, and even bigger boobs, and doesn’t try to mistake itself for anything else. We do get some brief glimpses into the lives of these four guys, who they are, what they brought to the band, where they came from, and all the other trials and tribulations they fought through as a band over the years, but nothing more really. The Dirt is mainly concerned with keeping the good times coming and not having to focus on that silly stuff like character development or, really, anything resembling depth.

It’s mostly just a blank and soulless movie, which in a way, is how you could perfectly describe glam metal. And yes, Mötley Crüe was perhaps the biggest band to come out of that sub-genre, allowing it to all make sense why they are no longer a band and glam metal, for the most part, is a thing of the past. Both are nostalgic pieces of pop-culture to hold onto as a way to allow ourselves to remember a time when things were simpler and all we wanted to do was go out in the woods, get drunk, smoke, and make-out with whoever wanted to, and really, that’s how they’re best left.

The Dirt is a simple reminder that these things are best left in the past, only to be touched-upon every so often. Director Jeff Tremaine tries his best to keep the party going, but there comes a point where there’s no surprises, no actual depth, and no actual sense that what we’re being told is actually important, which is the only reason for a biopic in the first place. Sure, it’s to tell us about all the crazy stuff these guys did together, as well as the dangerous stuff, but it’s also to help us figure out why we’re being told this story, why these guys deserved to be talked about, and why an outsider to the world of glam metal should take extra notice to Mötley Crüe and what they’ve done for the world of pop-culture as a whole.

But that’s not here. It’s not even anywhere to be found.

Consensus: By doing its absolute best to ensure that everyone has a rockin’ good time while watching, the Dirt forgets to actually inform us of why any of this matters and is more than just a traditional biopic on a band that time may soon throw in the past, never to be touched upon again. You never know. Crazier things have happened.